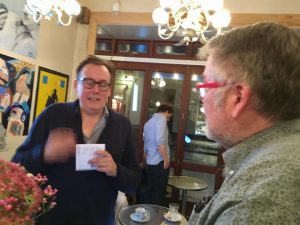 About us
Salon Schmuus is shmooze and Jewish culture with lectures, music and a good cup of coffee. We meet once a month.

There is no life without shmooze

Find us also at Facebook or write to us at lehrerski@gmail.com

September 8: Knud Romer about to be Danish, Jewish and everything else.